Empower women to empower women is a phrase that is near and dear to my heart. I’m so proud to have been involved in the International Women’s Day event hosted by Introhive on March 4, where we heard from strong leaders who are championing women and helping to pave the way for future generations. Our amazing line up of panellists was:

As the conversation kicked off, we were able to hear the panel’s own career paths, with their experience spanning collectively over 50 years. The advice they gave along the way was second to none and to pick out a few highlights was a very difficult task. 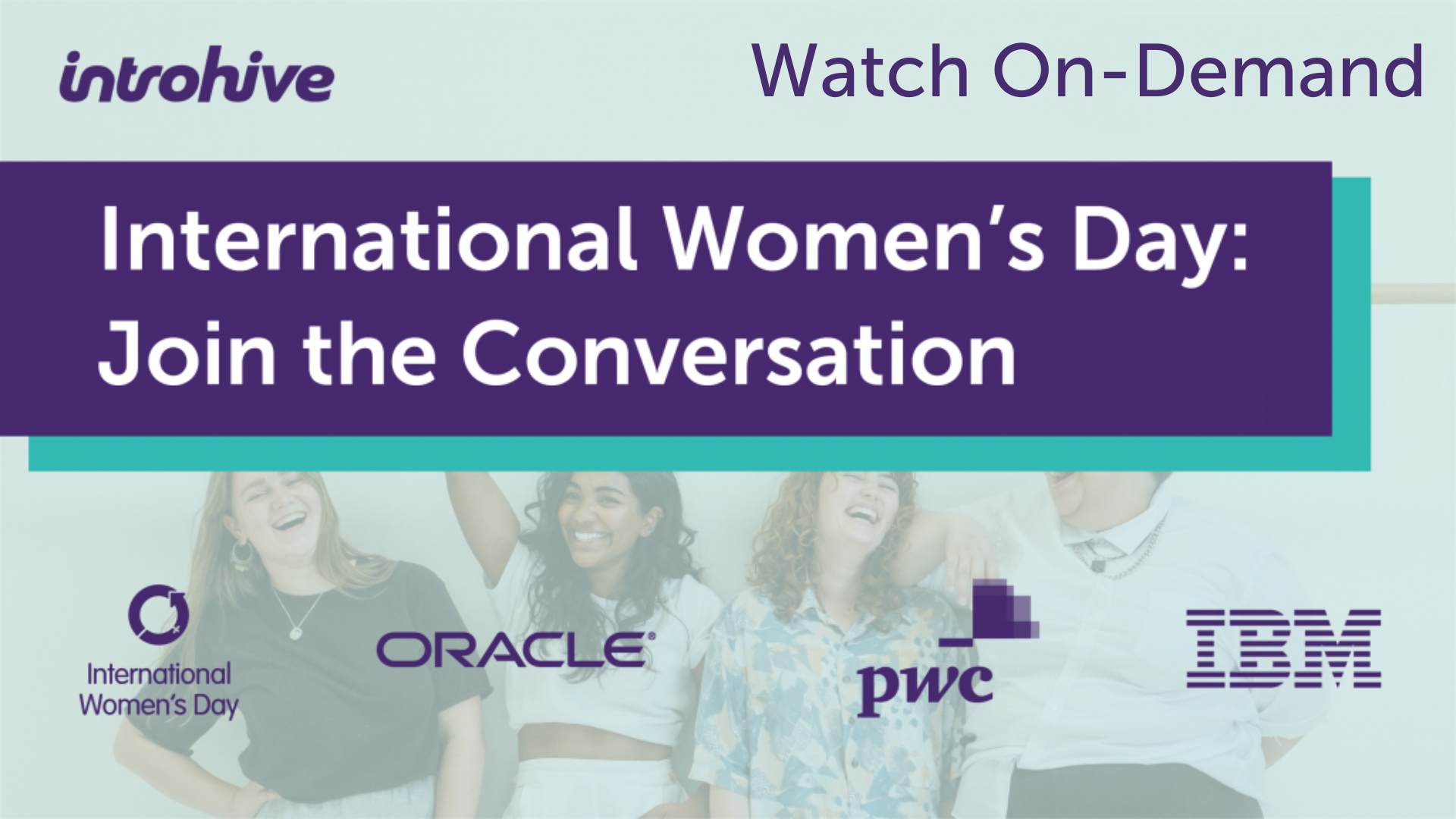 Then & Now: Lessons from careers

Talking through her career in becoming an executive, Angela explained the main focus for her immediately after graduation was to simply get a job due to the recession. Having worked at different companies, including KPMG, EY, and IBM over her career, something that really stood out to me was when Angela said,  “Although the role itself might be slightly different, it’s calling upon a lot of the same types of skills and experience that I needed to have.”

Three stellar bits of advice that came from Kimberley when talking through her career were:

Kimberley went on to add  “Align to the mission, purpose and values of the organisation…. I’ve never been confused about activity and I am results-driven… I am aligned with what gets counted.”

The idea of asking yourself why not? was further echoed with Christine and how, in her career, she had the need of wanting to be challenged. Having great peers, mentors, sponsors, learning from junior members on her team and feeling that she was making an impact, all played a part in her career progression.

As the spotlight turned to Diana, she explained how the landscape was a lot different now than it was in her early years as when she scanned the room it was all men and she was often the only woman. For me, this was so positive to hear how things have progressed in technology firms, albeit not where we need to be just yet. Key advice given to Diana by a previous mentor that has stayed with her was  “Focus on your hard work, and the results of your hard work are going to bring you to the next level… focus on the quality of work and the rest will fall into place.” This is something that all of these women have clearly done given their success in their leadership roles.

As well as having that drive and working hard to succeed, another collective point that came out from all of our panellists when speaking about their career paths, was the topic of mentorship and sponsorship. The two words are often interchanged or used the same way but they are quite different as the panel explained.

As Christine described, “Imagine an Olympic athlete, where a mentor may be a former athlete who would be able to say, I’ve been in your shoes, here is some advice, here are things to help you as you continue to train and compete. Whereas a sponsor is putting out some financial risk. So they are actually signing up to sponsor you, they are taking some risk, they are giving up capital and really putting a bet on you.”

I was interested to hear from Kimberley the idea that you may not even realise you have a sponsor, which has actually occurred in her case. The sponsor had watched Kimberley and was willing to take the chance to trust her to do a great job and in turn, Kimberley paid it forward by being a sponsor for someone she had faith in.

How can you get a Sponsor?

I’m sure this was a question that many in the audience were thinking, as was I. As Angela went on to explain, you can’t seek out and ask someone to be your sponsor as they have to choose to invest in you. They are using their own personal capital and are in a position to help you get to the next step in your journey. You have to earn a sponsor.

Sponsorship resonated back to earlier in the conversation around the idea that if you are getting results and putting in the work it really will get noticed.

Many of us will have mentors and likely more than one for different areas of our lives and hearing feedback is part of the mentorship process. On this, Diana highlighted,  “You have to be open to what they are going to tell you. In order for you to grow and succeed you are going to have to take the good, the bad and the ugly. There may be times when you receive constructive criticism, but what you do with that will really define who you become”.

Earlier in the conversation, Diana talked about women having a seat at the leadership table and the changes she had seen over the span of her career. Expanding on this further, Kimberly said  “We have come a long way but we are not yet where we need to be. We are not at commiserative percentages in senior-level positions”. With there now being heightened awareness it poses the question why is there a gap between the entry-level colleagues and the ones who become senior partners? Something that could also be unfortunately widened with the pandemic.

There’s work to be done

Kimberley then went on to talk about women of colour and how  “We have the opportunity to fully understand the challenge, to listen and learn and understand the day in the life of someone whose intersection is race and gender and that doesn’t discount all of the other diversity segments or orientation”. As Kimberley further explained, “our female caucasian colleagues have done better in some of the metrics, but we have not seen a commiserate progress happen in women of colour and there is more we can do”. Speaking of her excitement at seeing more highly skilled, high performing, results-oriented, getting it done, deserving women of colour moving into those senior and board positions, struck a chord with me. It highlighted, again, the importance of personal responsibility and how she “hoped that everyone listening resolved to be an ally, one to the other and that together we can really make some meaningful and impactful progress”.

As the conversation steered towards the final topic around motherhood and the idea of work/life balance. I was astounded when Diana explained that when she had her daughter 23 years ago she in fact gave up her maternity leave to prove to her company that she could still be productive. Key advice Diana went on to give was:

Echoing this advice, Angela added the idea of the work/life balance is not purely a day to day idea but is a long-term effort in the fact that there will be times you need to work a lot more than others. The key takeaway for me as Angela stated is to find out “What fits your life, what makes you feel satisfied and happy given the key things that are important to you in your life right then”.

As the event drew to a close, I reflected back on what these ladies had said and hearing their stories, their advice, the challenges and their strength has left a powerful and lasting imprint on me.

Progress has undoubtedly been made, even when looking over the last 20 years but there is still a significant way to go. More accountability is needed by each and every one of us and at a company level in continuing the changing in culture towards women in the workplace and this isn’t merely about having a diversity and inclusion policy, but much more. As women, we need to do a better job of championing and celebrating each other because as Maddy so rightly said at the very beginning “When women support women incredible things happen.”

I think of my 18-month-old niece and my hope as she grows up is to know that, as a woman, she has no limits, to take every opportunity, and that when she is my age she can look back and be proud of the progress my generation has made for her as these ladies have for me.

I sign off with the final bit of advice from each of our inspiring panel:

Angela – “Recognise when there is a learning to be received, a feedback to be internalised and a thank you to be given”

Kimberley –  “Definitely establish a personal board of directors–mentors, coaches, and sponsors but remember that you are the CEO of your life and career.”

Christine – “Chart your own course, be brave and no regrets!”