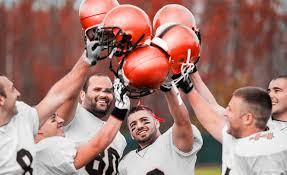 Well it wasn’t the biggest nail biter of a game ever, but we still had a really fun weekend of Football. Another Superbowl in the books and the Seahawks have been crowned. I’ve shared my obsession with football before when I talked about the lessons we could take from Fantasy Football in sales negotiation, but this recent game has got me thinking about something different — what goes into creating a great team in business. Because at the end of the day, it’s the great teams that come out on top across every industry and in sports.

Teams are the backbone of business. It’s the people we work with who help us achieve our goals and together we move forward as a unit. When you look at the great companies that have changed industries and the way we live, it’s the organizations with strong teams that come to mind. As soon as an organization’s people start to look at themselves as individuals and not a team, the company suffers. If your sales manager is only worried about his own success then their employees will fall victim to a similar perspective and be only in it for themselves. It’s no way to run a company and no way to run a successful team.

So how do you create a great team? How do you build a team that can identify a goal and move forward together to achieve it? These are questions that have been asked by organizations, CEOs, and managers for years. In this post, we’ll uncover some of the similarities between the champions in sports and the best teams in business.

Get The Right People On The Bus – Then Drive

The best Superbowl teams don’t always have the greatest quarterback or even the greatest defensive core. In fact, Sunday was the fourth time in the current playoff format that the no. 1 seeds from each conference played in the Super Bowl, and the first since Peyton Manning’s Colts lost to the Saints four years ago. So what differs between the great teams that make the championship and the great ones that miss it? Upon answering this question, I’m reminded of the concepts described in the book Good to Great by Jim Collins. In this novel, Collins and his team reveal years of research and studies around the differences between good companies and great ones.

In the third chapter, Collins talks about the idea of asking “First Who…Then What”. In describing the concept, he explains that the best business leaders start turning their organizations from good to great by first getting the right people on the bus (and the right people off the bus) and then figuring out where to drive it. In sports, this is a key part of the puzzle as it relates to building a great team. The Broncos put in a serious effort to attract one of the greatest quarterbacks of all time after bringing in a young cast of offensive weapons. In Seattle, the team is built around a combination of both an amazing secondary and an unstoppable front line that is nicknamed the “Legion of Boom”.

In business, it’s important that we’re always looking to build the right team. In Good to Great, Collins talks about how building a great team is more important than figuring out where you want to go. It reminds us that you can develop a strong strategy but without the right team, it will be impossible to execute that strategy to perfection. As such, when you’re looking at your organization and the goals you have for the coming months and years – think about the people who you currently have on the bus and what roles you need to fill to be a championship team.

Love Your Team More Than You Love Yourself

We’ve talked about the power of relationships in business many times and it’s one of the key drivers of successful teams. The teams who succeed tend to have great working relationships with one another and have a shared understanding of each other. The best teams are those who have relationships outside of the office but are still connected by a shared goal when it comes to work. These teams can spend hours talking about their goals for the coming year but can also spend hours talking about their personal lives and vacations.

Peyton Manning built a reputation in the NFL for showing how much he appreciated his offensive line by giving them gifts at the end of every season. He understood that while it was unnecessary, that these guys were protecting him all season and that the team’s success laid heavily on their shoulders. It’s this appreciation for teammates and the relationship that you establish with them that differentiates championship caliber teams and the rest. It’s this sense of appreciation that builds the bond with your colleagues and establishes trust.

Take time to understand how you can build relationships with your teammates and show them that you’re in their corner. It’s important to never throw your team under the bus and always put the organizations goals first. In doing so, your team will respect you and be confident in your abilities moving forward.

Be Your Teams #1 Cheerleader

During my time in advertising, I had an opportunity to work with a wide range of clients and marketing teams. One thing I noticed about the teams who were always on time for meetings, always eager to do great work, and always thirsty to come up with the next big thing was in their team dynamic. The people who made up these teams were never thirsty for credit. The managers were always humble and gave praise to their teams when a job was well done.

In addition to these great teams, I’ve also worked with teams that were filled with dysfunction. I remember one manager who would constantly seek recognition and even make the point to say things like “At the end of the day, we’re going to use my idea.” It was a toxic situation. The entire team had this defeated and grim expression on their face. Not beat-down defeated, just a we-give-up-defeated.

If you’re a sales manager – it’s crucial to be your team’s best cheerleader. If you’re a sales rep, community manager, marketer, or any other member of the team – it’s still very important to celebrate the success of your colleagues and peers. The team that celebrates together, wins together.

Give Your Best Players, Big Opportunities

In business, it’s very easy to focus on your problems instead of your opportunities. Problems come knocking at our door screaming and yelling while opportunities are merely dreams until we chase them and make them real. It’s easy to patch up a problem by putting your best people on it. It’s a sure-fire way to know that the problem will go away and that you’ll be able to continue about your day with little worry. But is that really the best approach to succeed?

Business works the same way. If you see an opportunity within your industry or organization that could drive a significant amount of new business – put your best people on it. Don’t leave your best people to work through the simple problems that could be resolved by anyone. Instead, empower them to do meaningful work and give them an opportunity to do something great for your organization.

It’s not easy to build a great team. It’s not easy to change an industry or win the big game. It takes a conscious effort and a dedication to those on your team to move forward towards a unified goal. If you can implement the strategies and ideas we’ve discussed today, I’m confident that you will be able to see a significant change in your team’s dynamic and organization’s success.